An inspection coordinator, in other words, test leader, selects four or five testers, one of whom is appointed as a chairman of the test commission. The coordinator also decides the time and place of the inspections. He prepares four or five documentation packages for the testing team, including copies of the module listings and associated project documentation, several inspection forms and checklists corresponding to this stage, drawn from the experience of previous inspections. These documentation packages are sent to the members of the commission within two days before the meeting of the commission. Each member of the test group should be peculiarly prepared and trained for the mission. The chairman of the commission and his people should know that they should spend one to two hours to get familiar with the materials submitted to the inspection before the commencement of the meeting of the commission. Be aware that employees of independent testing services company are capable of resolving any quality assurance task cost effectively.

Each of the testers can make notes on the source code listings, and the remaining comments are entered in the inspection forms included in the documentation package. The testing forms are partially filled by each member of the commission before the meeting takes place. This also refers to a list of possible errors, modifiable areas, comments on non-compliance with relevant standards, etc. On the eve of the meeting, the chairman of the commission should invite each member of the team to make sure once again that they have completed the review of the materials and to notify of the specified time and place of the meeting. The schedule for a typical inspection is given in the table, but if necessary, the timing of the individual steps can be reduced to one day.

Table. Schedule for a typical inspection 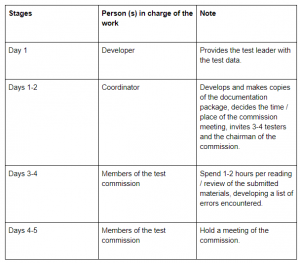